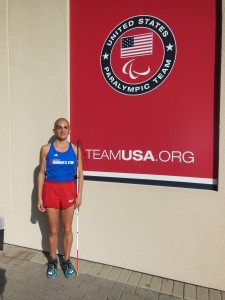 Thanks to Ellen and Pattie for the awesome Runner’s Stop T-shirt!  It fits perfectly, and I’m honored to be wearing it around the Olympic Training Center!

Visit the Runner’s Stop online at:

Picture of Ivonne in the hospital.

Three sessions into my Chemo treatment and the side-effects are getting stronger.  After last Friday’s Chemo, I could hardly eat or drink anything because my stomach was in so much pain.  It felt like my stomach lining was disintegrating, and every time I ate or drank anything, I would go into severe cramps. I felt tired and week, as though there was nothing in my muscles.

I finally decided to visit the clinic and check in with the CTCA Doctors on Tuesday morning.  As it turns out, I was admitted right away. Blood was drawn, a CT Scan of my abdomen was done, and I was put on IV fluids right away.  Over the next couple of days, I would learn a lot about being an in-patient!

In a nutshell:  My white blood cell count had dropped, including my neutrophil count, which was at 900. Basically, if the neutrophil count drops below approximately 1,700, in adults, you are at severe risk of infection. When Neutrophil counts are below normal, this is called Neutropenia. I was also extremely dehydrated, which I knew because I had barely been able to drink more than a couple of sips at a time over the prior 3 days because my stomach would cramp.  Then there was the stomach pain, and nausea and vomiting that wouldn’t go away…I was amazed at how much liquid vomit I could produce without having eaten anything!

There were so many other interesting things about which I made mental notes.  First, Except for once, my vomiting or urine were not measured during my hospital stay.  This was odd because I’ve always heard that nurses should be tracking the amount of liquid that goes into a patient’s body and the amount of liquid that comes out; i.e. What goes in must come out…Second, there was the Naturopathic Dr. who tried to use manipulative psychology on me as she said, “I wouldn’t normally prescribe Protonix, but in this situation, I think it will help you.  Plus, it will make you feel better soon.  So you should take it because it will make John feel better if he sees that you are feeling better.”  Now, John is my husband, but this isn’t about anyone else other than about me.  This is my life, and while I’m of sound mind, it’s about my choices and my decisions.  Not to mention that the manipulative approach to get me to take more medication, especially from a Naturopath, was disturbing!  Need I also mention that one of the reasons why I had chosen to do Chemo at CTCA was because of the Holistic/Naturopathic component to treatment that they claim to offer.  So to have the Naturopath prescribe and advocate for medication, taking more of a Western/conventional avenue to treatment, was dishearting.

Turns out that All Natural Baking Soda was the key to my recovery.  John started mixing in a pinch of Baking Soda in a cup of distilled water for me to drink.  The first 6 ounces stayed in my system for about 5 minutes before I regurgitated it.  About 20 minutes later, I drank another 6 ounce cup of the mixture; it stayed in my system for about 15 minutes longer.  So we repeated this a few more times, and each time the water with Baking Soda was staying in my stomach longer and longer, as much as an hour longer.  The relief I was feeling in my stomach was incredible.  What was happening?  The Baking Soda was neutralizing my stomach and naturally taking care of the acidity in it.  This was also allowing my stomach lining to relax, and as a result the cramping was calming down!  Who knew that something as basic as Baking Soda (aka Sodium bicarbonate) could do the trick!

I am thankful that I fought through this all, and that I stood strong for my belief that the body has an amazing ability to heal itself if we are kind to it. It’s important to be your own advocate, to do your research, and to understand what is happening and could happen to your body!

Today, with my husband, family and friends alongside, I’m out of the hospital!  Thanks also to my friend and guide Bryan Sedlock, and his girlfriend Andrea, for coming to visit me; their company lightened up Wednesday night tremendously! 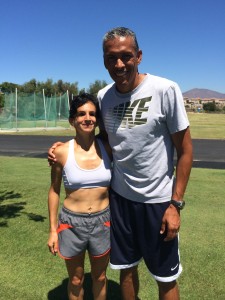 This is the first morning with my new haircut.  I feel like a new and refreshed person.  I also slept really well last night because I wasn’t worried about my hair falling out as much every time I moved my head during the night time hours!

So, it was time to share my new haircut with my fellow athletes, the staff, and my Coach Joaquim Cruz at the Olympic Training Center.  Plus, the weather is lovely today, so it’s perfect for a nice walk.